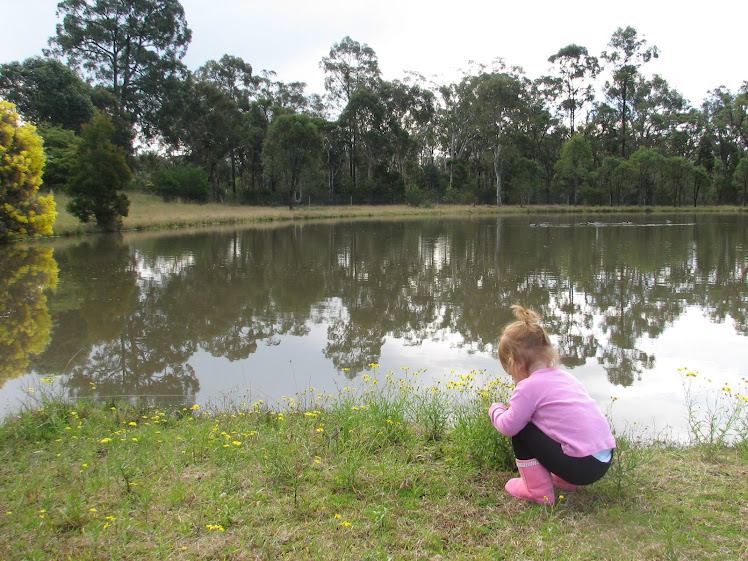 Snow globes were an activity i had been keeping up my sleeve until winter so last week hit the middle of a very frosty winter here in Sydney so we set about to make our first snow globes.
Tara searched the house for two plastic objects that would fit into the lid of a jar easily. I used superglue to secure them inside the lid. The fairy needed a platform to raise her up so she was visible in the jar so i used plasticine. We waited 24 hours to let them dry. 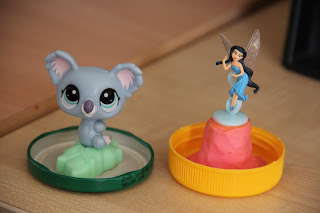 In the glass jar we filled it with cool boiled water and added a splash of glycerol. If you don't have glycerol you can use clear washing up detergent or baby oil. This will help the glitter and sequence fall gently down. 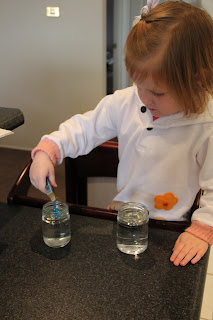 Our water with glycerol, glitter and sequence 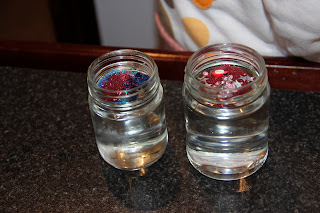 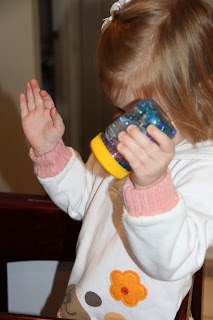 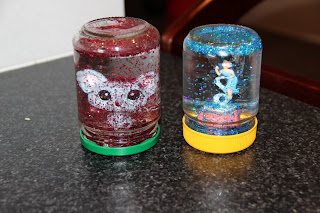 We love our Easiyo maker and although some may think of nothing worse than making a mess from head to toe with your food, it is a great learning experience for babies. I made up a batch of Mason's yogurt http://www.goldenglow.com.au/product/EasiYo-Bio-Life-Organic-Unsweetened/378/103
Covered his highchair tray with foil so the white yogurt would be more visible and create a nice shiny picture. Placed some dobs of fresh homemade yogurt and put him in to explore. 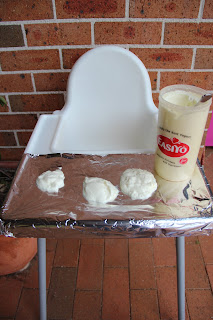 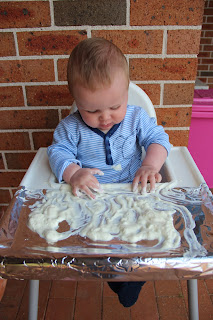 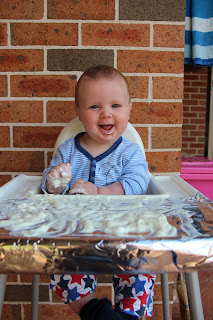 Then into a warm tub of water outside to splash away all the mess! 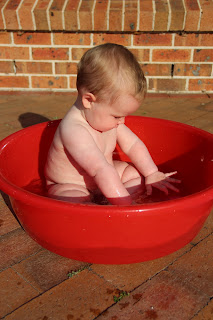 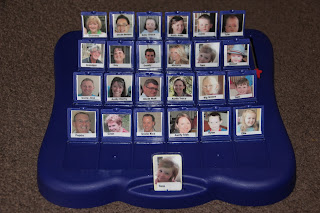 It was time consuming to make but very easy, just find up close photos of people as well as write names under them and print of three copies. Cut and laminate and superglue them to the flips of the board keeping one set for the cards. 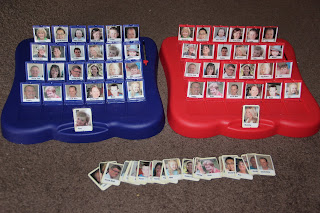 I used the "tinkers" brand from Kmart as it was only $10 and it doesn't have any slots for the cards to fit into you can just glue them onto the flips. Next on my list is to make an animal version as i was going to included our pets to the game for a great fur/skin question but with the amount of pets we have they need their own game! 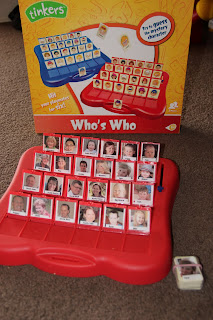 Email ThisBlogThis!Share to TwitterShare to FacebookShare to Pinterest
Labels: games

Starting Tara at preschool one day a week was a lot harder for me than it was for her. The way i hid all my anxiety was to create her a yummy lunch that would bring a smile to her face.
Here are my first few creations 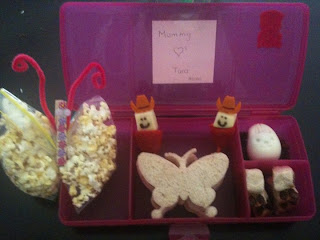 Popcorn butterfly-A simple snap lock bag half filled with popcorn twisted in the middle and secured with a peg. Add pipe cleaner for antennae and googly eyes. Butterfly ham sandwich-used a dollar store sandwich cutter. Apple & strawberry cowgirls-diced fruit threaded onto a cowboy hat toothpick. Bunny boiled egg-Just hard boil an egg and place in egg mould while warm Jam snails with sultana eyes-Use a slice of bread,butter and jam one side then roll it into itself until it forms a roll. Cut 1cm snail portions then add two sultana eyes 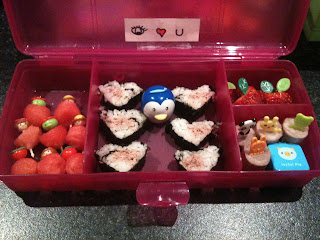 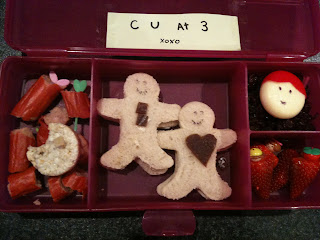 Tara helped me with this one as she her lunches are now becoming the highlight in preparing for preschool.

Baybel lady - unwrap the baybel wax on one side use a sharp knife to cut out hair design, on a bed of sultanas, strawberry people, gingerbread sandwiches with fruit strap heart or buttons -we used Tara gingerbread cutter from her playdough cutters and Tara's own creation was the pac man rice cake with an apricot eye munching on cabanossi 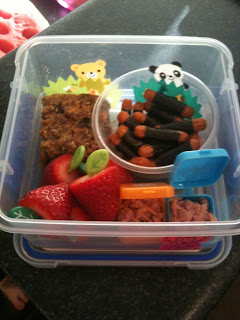 Gluten free slice with strawberries, seaweed rice dippers with a tuna dip in her square containers 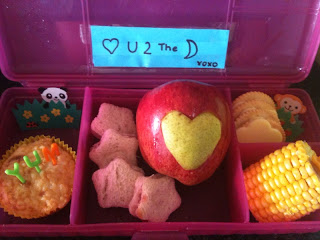 Risotto cake "yum", star jam sandwiches thanks to Tara's playdough cutters, Apple and pear heart made by using a sharp knife to dig out a heart shape in the apple then cut the same design from a pear and place the pear into the apple and push until secure, corn on cob and flower cheese and crackers

Preparing playroom for a crawling baby

Mason has out grown his play space that i created in this area for him so i turned this part of our playroom into a geography area.
Each few weeks we have a country to discover and this week was The USA
I found some great resources at 1+1+1=1
http://1plus1plus1equals1.blogspot.com/search/label/America
Colour by number flag and a cute verse about America's currency. Grandma who had visited America bought us back some coins that Tara matched to the verse.
Her VTech globe gets a work out learning the animals and names of surrounding countries. 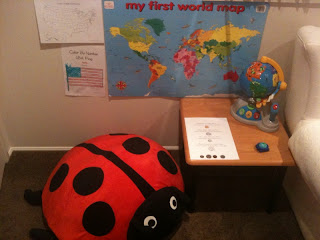 Our shelving had to be reorganised, as Mason will soon be exploring all of Tara's activities. Montessori shelving is great as the lower shelves can be used for the younger child's work while still having room for the older child on the higher shelves. 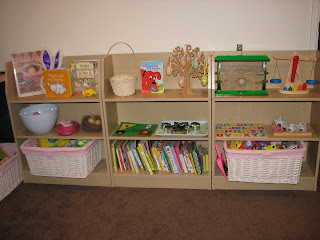 Our resource cupboard also was organised to allow Mason to easily find his work on the lower ground and Tara has her work on the middle while i keep all my resources up and away from both. We also added Tara's paint smock(daddy's wedding shirt) on a hook inside the cupboard so she knows where to find it when preparing herself for painting activities. 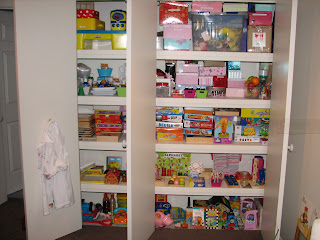 Mason has turned 6 months and he has been enjoying meals with us at the table along with practicing his drinking glass. Montessori teach that babies love to imitate their parents and as we are not using sippy cups, babies should be given the opportunity to use child size versions of our utensils.
A shot glass,espresso glass or even an egg cup are a great size cup for babies to learn to drink from. The only problem we have found is the slipperiness of the glass when water is spilt. 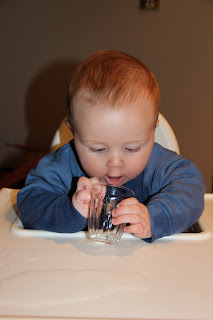 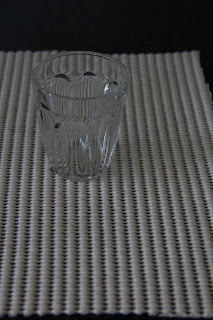 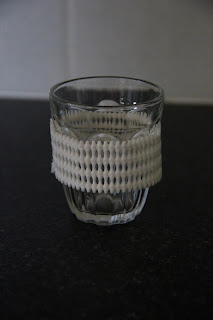 Funny looking but works a treat! 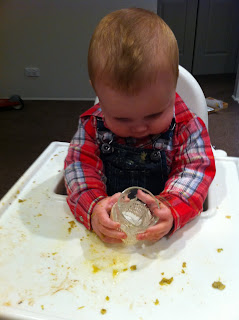 We are always looking for ways to use up our egg cartons! Seems we have collected more since having chickens of our own as everyone passes them on for us to use so while the chickens are having a break from laying during the winter we decided to use our cartons for a treasure hunt!
I googled some images of things i knew we had around our yard that Tara could collect. Glued the 12 pictures onto the egg carton and presented it to Tara 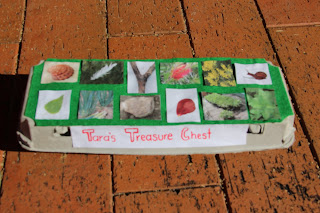 She loved it, and set about on her journey to search for her 12 items. This could also be done for a younger child with just a half dozen egg carton as i does take a while to collect all 12 items and all the hard concentrating to work out where they would be. 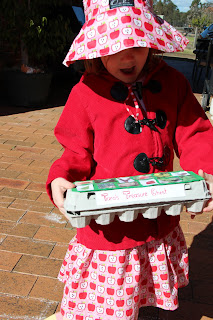 Grass was the easiest to check off the list first 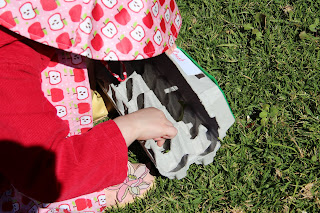 But eventually she found them all, a shell, feather, stick, bottlebrush, wattle, snail, leaf, spring onion, rock, rose petal, and mint. Talking about where a snail may be hiding or where she has seen wattle growing made for some great memory and problem solving skills. 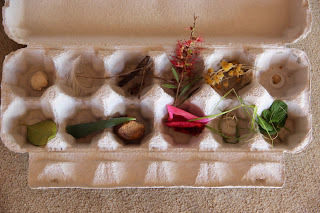